What is genetic ALS?

Whether you are diagnosed with familial (fALS) or sporadic ALS (sALS), there could be a genetic component to your disease. Below, you can learn more about the genes associated with ALS.

Amyotrophic lateral sclerosis (ALS) cases that have a genetic component—in people with familial (fALS) and sporadic ALS (sALS)—are referred to as “genetic ALS.” The discovery of genes associated with ALS has helped researchers develop a deeper understanding of the disease as they search for new approaches to clinical care.

Recent scientific discoveries have identified mutations in more than 25 genes that are linked to ALS. A number of these genes have been found in people with both fALS and sALS.

This means that even if a person has no known family history of ALS, a genetic component may still be involved. The most common genes linked to ALS are C9orf72, SOD1, TARDBP, and FUS. These genes are described in more detail below.

The most common ALS mutations—accounting for 40% of people with fALS and 7% of those with sALS—are in the C9orf72 gene and are known as C9orf72 expansion mutations.

Although, worldwide, more people with genetic ALS carry C9orf72 mutations than any other type, frequencies vary greatly by ethnicity and geographic region. For example, the highest frequencies of C9orf72 expansion mutations are found in Scandinavian countries, while SOD1 mutations are much more common in Asia.

These are the latest known percentages of the C9orf72 mutations among fALS and sALS cases, but the figures could potentially be higher. The only way to know whether a genetic mutation is present is to do a genetic test, which is not routinely offered to people living with ALS.

The first gene associated with ALS discovered in 1993 was SOD1. In people with SOD1-ALS, the SOD1 gene has undergone a change, or mutation, which results in damage to nerves in the brain and spinal cord that control muscle movement. 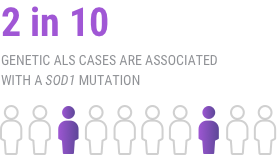 SOD1 gene mutations account for approximately 2% of all ALS cases. Among all people with ALS who have a genetic component, approximately 20% are associated with a mutation of the SOD1 gene. 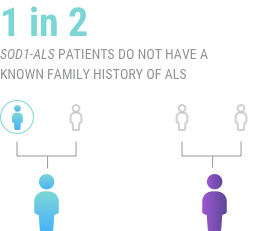 Nearly half of patients with SOD1-ALS have no known family history of the disease. Genetic testing may be considered for ALS patients even if no family history is present.

TARDBP mutations have been identified in people from a diverse group of countries and geographical regions, suggesting that these mutations may be a factor in who develops genetic ALS worldwide.

While most cases of TARDBP-ALS have been found in Europe, ALS-associated TARDBP mutations have also been identified in Japan, Australia, North America, and China.

While the course of disease among people with FUS-ALS can be unpredictable, people with these mutations may have shorter life spans than those with other mutations. Certain FUS mutations have also been linked to an earlier onset of genetic ALS, with some people showing symptoms before the age of 25.

As with TARDBP mutations, FUS mutations have been identified among people with genetic ALS in a wide range of geographic regions, including other parts of Europe, Australia, North America, Asia, and Africa.

What does it mean to have one of these mutations?

Even if two people with ALS were found to have mutations in the same gene, they could both be affected differently because of the different variants found within each mutation. This is sometimes ascribed to genetic penetrance.

How would you know whether you have a mutation associated with genetic ALS? Your doctor can order a test to see if you carry an ALS-associated mutation. Interestingly, over half of patients who test positive for an ALS-associated mutation have no family history. Also, because a number of these mutations have been found in people with both fALS and sALS, a genetic test may be considered for anyone with an ALS diagnosis.

Potential benefits of genetic testing for people with ALS include:

A better understanding of the basis of your condition, allowing for more informed healthcare decisions.

A better understanding of inheritance risks for your children and other family members that could help you make informed family planning decisions – even for future generations.

The opportunity to participate in clinical trials. Your doctor can help determine if you or a family member are eligible. These trials not only have the potential to inform clinical care, but also give people living with ALS an opportunity to contribute to important research.

Access to genetic counseling. Genetic counselors can provide information and support to people who have or who may be at risk for genetic diseases.

Scientiﬁc knowledge of ALS genetics is constantly evolving and researchers are learning more about ALS-associated genes. 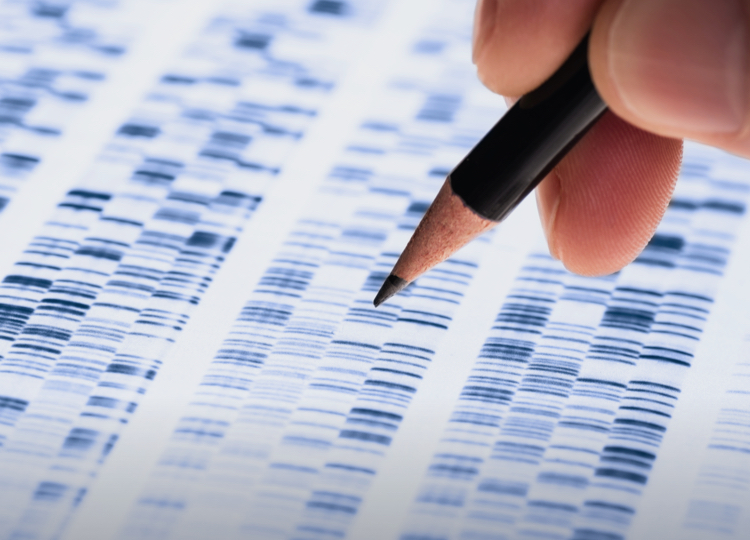 Access fast facts about genetic ALS that could help you be better prepared when discussing your disease with your doctor. 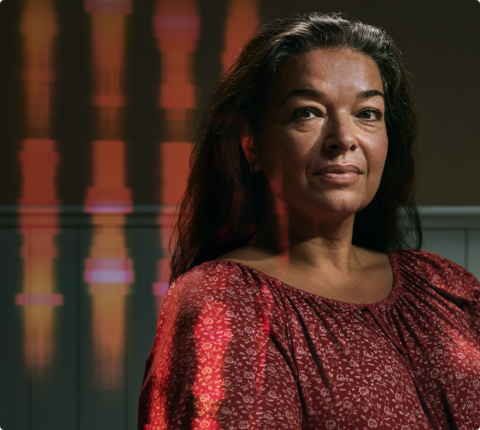 Genetic testing can provide important information about ALS. Talk to your doctor about testing today.